For me Christmastime begins with the watching of Christmas Eve on Sesame Street, and that time has come this year. This Christmas special is one of my favorites. As I mentioned in the introductory post to my tradition, my mom had made a series of VHS recordings of various Christmas specials, and one of them was entitled “Christmas 1”. Well since “1” comes first I’d always watch that tape first, and it just so happened to be that Christmas Eve on Sesame Street is the first recording on that tape. I loved it then, but getting it on DVD was even better when I was introduced to ten minutes of footage that had been cut off on my mom’s recording.

”Christmas Eve on Sesame Street”, as the title implies, takes place on Christmas Eve day. Oscar the Grouch has convinced Big Bird that it is impossible for Santa Claus to get down the chimney and that there wouldn’t be any presents on Christmas morning. Big Bird then tries find out how Santa can get down the chimney. There are several side plots as well. Bert and Ernie struggle to get gifts for each other. And Cookie Monster has a difficult time trying to send his Christmas list to Santa. 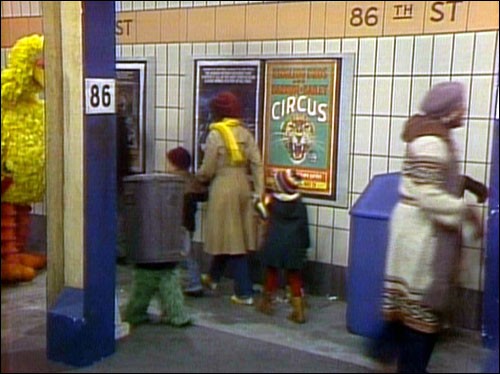 This feature was first broadcast in December of 1978, winning an Emmy Award for ”Outstanding Children’s Program”, and rightly so in my opinion. It has several original songs, all well performed, including “I Hate Christmas” by Oscar the Grouch. It boggles my mind that it is over thirty years old. I sometimes wonder what some of the kids that appeared in this are doing today. Even the youngest are at least in their mid thirties now. I hope that they are proud that they were a part of this. That pretty much sums up what ”Christmas Eve on Sesame Street” is. Now I want to talk about why I love it so much.

While Big Bird’s story is good, by far some of the best moments involve Bert and Ernie. I briefly mentioned the plot involving them, but at one point Bert is about to open a present and he compliments Ernie on how well it’s wrapped, and as he’s unwrapping it he wants to unwrap it perfectly. He thinks that maybe he could remove the tape first, or use “a scissor” to remove the wrapping paper. To me, this is absolutely hilarious. You have to see it to understand exactly what I’m talking about. Whenever I open gifts I like to emulate Bert and try to get someone to tell me to “just rip it open” in the same way that Ernie tells Bert to do so. There are many really funny moments like this throughout, surprisingly they are still funny to me, even as an adult. Every now and then, even when far from Christmas I find myself emulating and quoting phrases from this Christmas special.

Of course the feature is not all comedy, there are kindhearted moments as well. At one point Gordon asks Big Bird why he wants to know how Santa gets down the chimney. Big Bird says, “Well, Gordon, it’s important.” Gordon replies, “No Big Bird. That’s not what’s important. What’s important is that … we’re all together for Christmas. That’s what’s important.” This little conversation is one of my favorites. In many ways it applies to many different situations. We often find ourselves thinking that one thing is really important, and then later we realize that it doesn’t really matter, and that other things are important. That’s the theme of this Christmas Eve on Sesame Street, and that’s why I love it so much.

The beauty of ”Christmas Eve on Sesame Street” is that it really holds up, even today. This is a feature that parents can watch with their kids, and they will enjoy it just as much, if not more, than their children. The feature is surprisingly funny, heartwarming, and clever. It even recognizes that not everyone celebrates Christmas with a “Happy Hanukkah”. This is something that I would recommend for everyone. I’ll Finnish with the words of Grover, “And there you have it.”