As I was happily checking my mail one time in August, 2010, I got a notice from The University of Utah’s Commuter Services with “Important Parking Information Enclosed”. I didn’t know why. I wasn’t attending that university. I figured it was because I ”had” been accepted there and they were informing me about my options regarding getting a parking permit. I threw it out, and forgot about it.

In October, 2010 I got another letter from Commuter Services I opened this one. It wasn’t a flier informing me of my options regarding parking. It was a notice that I had received a parking ticket from them and failed to pay, and I owed them $158.00. I didn’t know how I could have possibly gotten a parking ticket in a city I hadn’t been to in months. I had given my mom a car that was still registered to me, and I thought maybe she’d parked illegally at some point. So I called up Commuter Services and they mentioned that it was for a scooter parked without a permit. ”Oh great”, I thought. I remembered owning a scooter, and I had sold it to some kid almost two years earlier. Apparently he’d never registered it and was getting in all kinds of trouble under my name.

So I tried to explain to this guy, Jake, that worked in the Commuter Services what had happened and that it wasn’t my scooter. The fact of the matter is that Jake could have just cleared the ticket right there. He should have, but he didn’t. Instead he bumped the price up to $204.00, and said that unless I could find the kid I’d sold the scooter to, I was responsible. I was so angry. I was yelling all day. I had no information on the kid I had sold the scooter to, not even a phone number. I was so angry I wrote the governor. I was so angry I called a lawyer. The lawyer wanted money. I didn’t have money since I was a college student.

I asked everyone I worked with what I should do. Some told me not to pay since I wasn’t attending the University of Utah so it’s not like they could delay my graduation for an unpaid parking ticket. The university was threatening to send it to a collections agency, though, and I didn’t want to have a scab on my credit report. I did find out that my university offered free legal counseling. So I went to see the University’s lawyer, Barbara. She offered to call the University for me to try to reason with them. She called them. She was really awesome, but she said they refused to do anything about it. She advised me to pay it, so that I wouldn’t have my credit hurt. I paid. I was so angry at the kid I’d sold the scooter to. He was costing me $204.00. I was angry at that guy Jake for not being reasonable. All he did was send me a picture proving that the scooter was parked there. 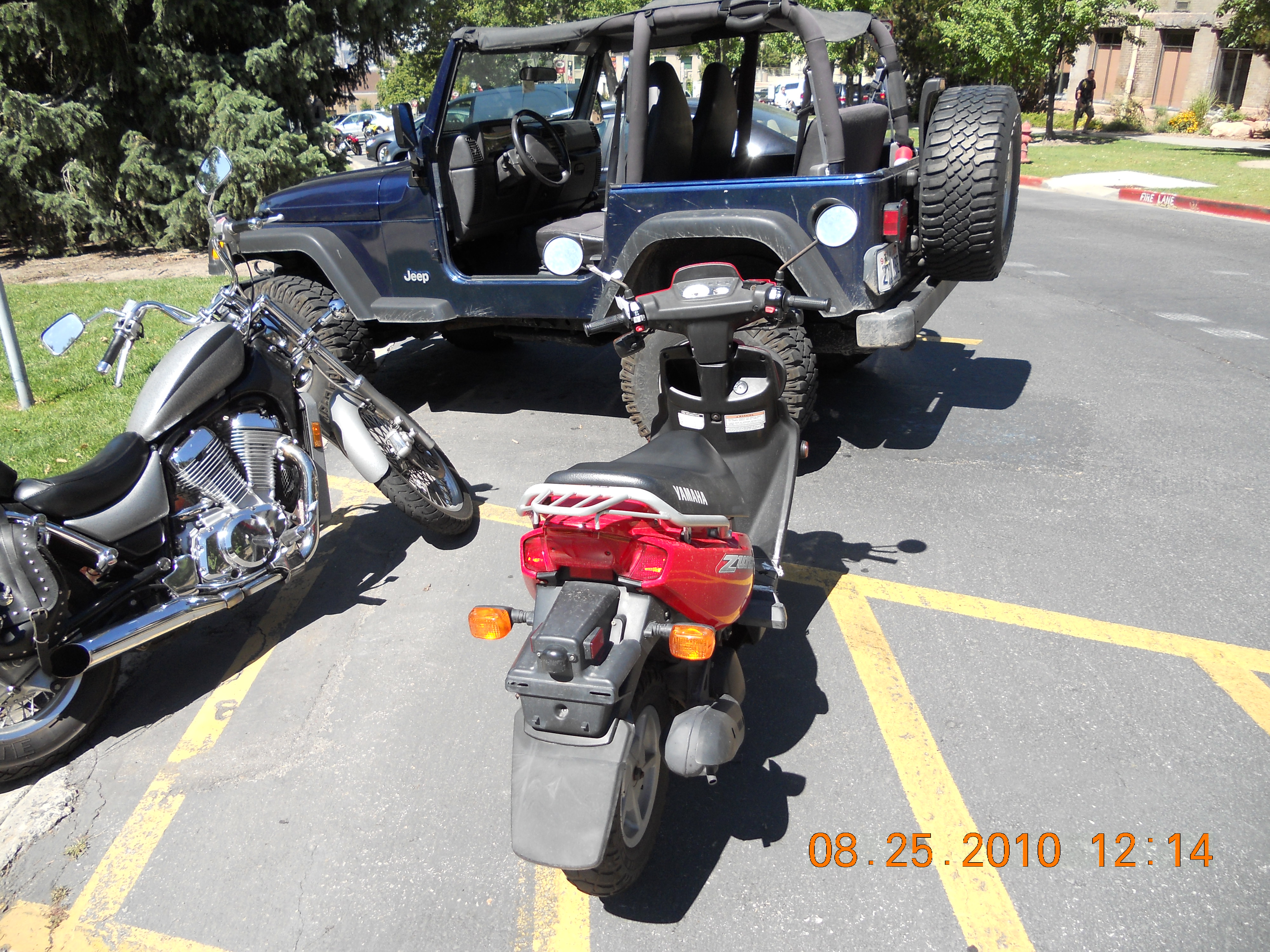 On a side note, I want to rant about that guy Jake. I’m pretty sure his full name is Jacob Richard Leany. He currently works for Fidelity Investments. If you married some guy named Jake that had a job in Commuter Services in 2010, then I’m sorry to tell you that you married a ”real” douche-bag. I feel bad for you. You should get a divorce. This guy gets a little bit of power and suddenly he’s a butt to everybody. Just imagine what is going to happen in your marriage! That’s who that guy Jake is. Just to make things clear. The kid that bought the scooter from me had actually got three tickets for $15.00 a piece for a total of $45.00. Heck, $45.00 is nothing. I wouldn’t have even cared that much, I’d just pay the ticket for that kid and consider it to be his birthday present from a stranger. But since I didn’t even know about the tickets for two months, they’d gone up to $204.00, and Jake, the moronic idiot, wouldn’t even budge on the price. He should have lowered it to the original $45.00, at least. That would be the reasonable thing to do.

Okay, so anyway, that was the guy Jake. Yeah, he’s a real loser. (Can you tell how much I don’t like that guy Jake?) Let me tell you about someone else, though. Remember how I said that I was so angry that I’d written the governor, Governor Herbert as a matter of fact? Well, a nice lady that works in the governor’s office, Nancy, responded to my letter, and forwarded my letter to the Board of Regent’s – Commissioner’s Office. The Commissioner’s Office then forwarded my letter to the president of The University of Utah, Mike Young, who then forwarded it to the Director of Commuter Services, Mr. Allred, who then wrote me back and said it seemed reasonable to pardon the tickets. I received this letter on November 15, the very same day that I paid the ticket. That means this letter had been signed and sent before I paid! So basically the right hand in Commuter Services didn’t even know what the left hand was doing. So I emailed Commuter Services and asked for my money back, and they confirmed that, in fact, I’d been pardoned, and then said they’d reverse the charge on my credit card.

I wrote a thank you letter to the lady in the governor’s office, Nancy.

I can’t believe what I went through. That’s why I feel comfortable saying that that guy Jake is kind of a loser, and that his wife should divorce him, or future wife should avoid marrying him, because when it came to reasonable people, such as those in the governor’s office, and the Director of Commuter Services, mercy was shown. Mercy should have been shown by Jake. I would totally vote for Governor Herbert, except that I moved to California and can’t, but I totally support a governor’s office that can get things done for the common man!

I do want to give a little follow up to how much I don’t like Jake. In ”some” fairness to him, I was quite rude to him in some of my emails. He retaliated with equal rudeness. This is the reason why I don’t actually hate him, but if I ever met him in person I would say, “Dang, dude! You’re so much more of a butt than the Director was. You got a lot to learn man, but I must admit that I’m sorry for being so rude to you. We both got a lot to learn, I guess.”

I don’t know whatever happened to the scooter or the kid I sold it to. It’s very possible that the kid has gone on some kind of rampage, and there are warrants out for my arrest. I hope not. It’s highly likely that the scooter got impounded at some point, and probably hauled to a junk yard. I did report to the DMV that it was sold, at least. That way I can at least prove that I no longer own it. My fear is that it’s still out there, and someday it may haunt me again.