Released in November 2009, Dragon Ages: Origins was heralded as the spiritual successor to Baldur’s Gate II. Prior to it’s release, publisher EA ran a series of teaser trailers portraying the violence, sex, and action featured in the game. Many were saying that it might be the Second Coming of role playing games. The hype was extensive. The advertisements were bizarre. The real question is: Does Dragon Age live up to the hype? Or an even better question: Is Dragon Age the game you want to be playing?

A word should be said about the advertisement campaign as well. EA, understandably, wanted to get this game sold, and to do so, they had perhaps some of the most ridiculous advertisements seen in the video game industry. Critics despised the fact that a Marylin Manson song was in the trailers, and that the games seemed to be focused around sex. Some journalists believed that EA’s advertisements were so bizarre in order to get console gamers to flock to the stores not knowing what the game was really like and buy it without thinking.

What is important in determining if a game is good, however, is not the advertising for it, or whether it is a spiritual successor of sorts to another great game, it is whether or not the game holds up. Dragon Age does just that, but, even the most loyal of fans should agree that it has it’s faults. Where the game really shines is in the writing and combat. Where it fails is in it’s closed world, generic story, and huge amount of choices. 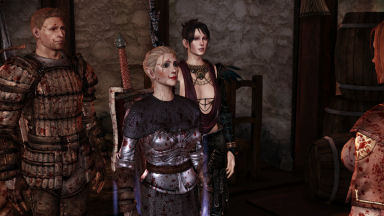 Gamers might find it interesting that a game can be well written, but still have a generic plot. The story of Dragon Age is pretty standard: Demons called Darkspawn are invading the land of Ferelden. The Darkspawn are led by an archdemon. This invasion is known as the Blight. There is a civil war going on in Ferelden as well. Pretty standard stuff. The player controls a party led by a Gray Warden and they set out to end the Blight. While this plot is pretty standard, the writing itself makes the story shine. The game has the Origins subtitle, because at the beginning of the game players choose an “origin story”. There are six in all, and each has profound consequences in various quests and storyline throughout the game. The choice of playing as a male or female character has effects on the game as well, so really one might say that there are twelve origin stories in all. The dialog and storylines within the plot are very well written, and also well voiced by the actors. Each of the characters has a unique personality, and all of them stay true to their actions throughout. Decisions made early int he game are not forgotten by the writers, and have effects latter on.

Combat is exceptional in this game. Though it can be difficult. Effective combat requires careful planning, setting up characters in a formation designed to protect mages is essential. A host of spells and skills are provided to aid in combat. Heavy fighters have the ability to draw enemies away from weaker characters. Bards have the ability to boost the effectiveness of all other characters. Having various classes work together can deal out a lot of damage. For example a mage can freeze an enemy, and then a powerful strike from a warrior will shatter that enemy in a single blow. The best way to learn effective combat techniques is to play. Of course, sometimes all your characters will fall except one, and then it’s just a matter of praying that your last character can make it through the battle. Sometimes they do! Sometimes you have to reload.

As a supplement to combat, the game has an almost neurotic obsession with blood. After combat, characters are covered in blood. When loading a new area the game has an animation of blood flowing all over the screen. When the party travels from place to place on the world map a little trail of blood shows which way they are going. The game may have been better titled Blood Age. Seriously, the blood doesn’t really detract from the game at all, and really the game isn’t as gory as other games, but it is interesting to notice.

While the game is well written and the combat is excellent, the game is not without flaws. Those that have said this is the Second Coming of role playing games and that this is the best role playing game ever made are wrong. There merely saying what EA wants them to say. It could possibly be the best written role playing game to date, but it is certainly not the best overall. Perhaps what holds it back most is that this game does not have the open world that the Elder Scrolls games or Gothic series have enjoyed. No, the world is closed. Players are limited to exploring a small number of areas, with a limited number of enemies. There really isn’t that much freedom in the game. Sure there are plenty of side quests, and completing the majority of them along with the main quest will easily give you sixty hours of game play, but it still feels like you’re in a limited world.

The other major flaw with the game, is that there are too many choices. You’re not going to have the full experience of the game the first time through. You’re not going to have it the second time through. Technically you’d have to play it at least six times for all of the origin stories, though you could simply play each of the origin stories and not finish the game, but still there are so many choices throughout, that you’d probably have to play about four times to get the gist of all the choices you can make. So what’s so bad about that? Many games can easily be played six times, but as mentioned this takes about 60 hours to complete. The second time through might be shorter, once you are more experienced, and have a better idea of what skills to use, but still, it probably takes a minimum of 30 hours to complete this game. That requires a lot of gaming for the full experience. The thing about that too, is that though the story is different depending on the choices you make, you still fight the same battles in the same areas, and you’ll probably do the quests in a similar order. So you really aren’t doing much differently other than clicking some different dialog options. EA and Bioware are releasing various DLC expansions, so perhaps when new DLC comes out it might be time to play through again. Players probably aren’t going to want to play through two times back to back, so a break is necessary.

This review wouldn’t really be complete without discussing the sex. Yes, there is sex in this game, but it is hardly exciting, and the animations are silly. The sex generally occurs between party members, usually the player’s character and one of the other party members, but on some occasions it can be between two non-player party members. It really isn’t a big deal, and it is not the focus of the game, despite how EA may have made it look in the trailers. This games is fully open to any type of relationship whether it be strait, gay, or lesbian.

Overall the flaws of this game are not too serious, and do not hold the game back too much. It may not be the best RPG, but it is an excellent RPG. There are so few party based RPGs that that experience alone makes it worth playing. Anyone that is interested in using tactics during combat rather than just hack and slash, and anyone who likes to control many party members at a time are going to love the combat in this game. Players that enjoy strong dialog and characters that have believable and likable personalities will also enjoy this game. A warning though, this game is intended for serious RPG players, it is not going to be easy for those who bought the game, because the trailer showed some characters making out. The combat is glorious, the tale is epic, the game is excellent.