I originally wrote this when ”Skyrim” first came out, but I didn’t feel my thoughts were coherent at the time, so I didn’t publish it. Now that I’m going on hiatus from writing the blog I thought I’d finish up some of the thoughts I had lying around in my head.

I was first introduced to ”Daggerfall” in PC Gamer Volume 4 Number 1, January 1997, and that’s where my love of ”The Elder Scrolls” began. There were two demos for ”Daggerfall”, one let you explore a dungeon, the other let you explore a whole island, this was the demo included with the issue of PC Gamer. The demo allowed exploration of the island of Betony in the Iliac Bay. The demo included pre-saved characters, so I began with a character just outside of one of the cities on the island of Betony. As I walked into the town my mind was boggled by how big the city was, it stretched for miles, had hundreds of buildings and thousands of people. Literally thousands, it was a very populated world.

One thing I’ve always liked in RPGs is”paper doll” type inventories where you get to dress up your character and see what they look like, and ”Daggerfall” was not lacking in this area. The interface wasn’t as intuitive as drag and drop, but it was there. I remember looking at my character sheet, and clicking on weapons to equip them. You can also “use” clothing, and change the way it appeared on the character. For example you could wear a cloak with the hood up, the hood down, the cape wrapped around your shoulders or behind your back. Of course playing with equipping and equipping items I found that I could un-equip the clothes my character was wearing, and to my amazement discovering that my character, who happened to be female, was completely naked underneath. My brother was watching me play, and he was equally amazed. I remember having my character walk around topless, and the various townspeople I talked to actually responded to the fact that she wasn’t wearing anything. It truly felt immersive.

I remember fondly seeing a patrol of guards walking around the city walls. This was truly amazing. While most of the population just seemed to walk around at random, here was an actual organized group patrolling the city walls. I just had to know what it was like to talk with them, to see if it would interrupt their patrol, or if they would continue on, well, due to the complex interface that the game had, when I clicked on a guard I was in “steal mode” so instead of talking to the guard my character attempted to pick-pocket him and being caught I soon found a dozen guards coming after me. Without even knowing what happened I found myself under attack by the guards, and then thrown in jail for thievery, sentenced to years in jail. I served out my time and loaded a different game.

One of the pre-saved characters included with the demo was simply standing out in the middle of nowhere. I remember walking around for a few minutes looking for anything of importance. There was absolutely nothing out there, no matter which direction I wandered. Just a bunch of hills and the occasional dead tree. No monsters, nothing, just a barren empty world. I didn’t know about fast travel at the time, so I loaded a different game, on that was already in a city.

And so the ”Daggerfall” demo came into my life, and I was forever impressed. I wanted the game more than anything, but I was a kid with no money, and on top of that the game wasn’t really well known enough to be carried in the department store nearby. I had one friend that told me his cousin had it, and he said that if you broke into someone’s house at night, sometimes you could walk in on them having sex. That was a lie, but I can see where a rumor like that would come from, since the game was, after all, one of the first games with nudity readily at hand.

Years later I did get a copy of the game for myself, in 2001 I think. I got it looking forward to Morrowind. When I finally was able to fully play it one of the great joys I had was owning my own home. The first time I bought a house I went to the various provinces of the Iliac Bay, borrowed money from the banks, and returned to the province of Daggerfall. You see, each province had it’s own economy so you could borrow lots of money, and so long as you never went back to those provinces no debt collectors would ever ask you about the money you owed. I bought a house in the city of Daggerfall for around 800,000 gold. It was the biggest available. It was also a really badly designed house. It had maybe eleven rooms, but the entrance to each room was on the outside of the house. I couldn’t even go from room to room without going outside. I sold that house and bought a different one. A little smaller, but still two stories high with a balcony. I could actually get around in this house without going outside. I was a lot happier with it. Forever after that, after a long day crawling through a dungeon I would go to my house, take off all my armor, put on some comfortable clothes and sandals and sit by the fire, or go and stand on the balcony and enjoy the rain. I always felt kind of bad about that, though, knowing that I had bought that house with money I’d never pay back. In my second play-through of the game, years later I found legitimate ways of making a lot of money and bought a house with money earned from long days of scavenging and completing guild quests. 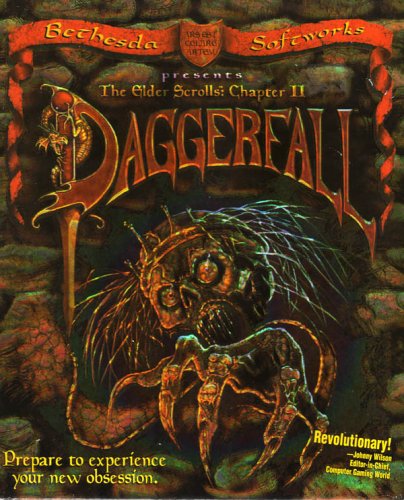 As good as ”Daggerfall” was, I have to admit, it had it’s shares of problems. I won’t bother going into details about the problems, since anyone who has played the game knows what they are, but I will sum it up into a single line: ”Daggerfall” was too ambitious, and in doing so it became monotonous. The technology existed to create a big world, but the technology didn’t exist to create a world that was both big and interesting. Even as I played it I awaited Morrowind.